The Port will be hosting a visit by representatives of the ad agency, Gillies and Zaiser PR, as part of the Louisiana Tourism Coastal Coalition. Mindy Bianca, Executive Vice President, and Lauren Frye, Senior Account Executive, will be visiting Delcambre on Thursday, March 16th. They will tour Bayou Carlin Cove Boat Launch and Pavilion, North Pier Marina, as well as other sites in town.From there, the tour will continue to other stops in Iberia Parish, including Bayou Teche Museum, Jefferson Island, KONRIKO Company Store, and other sites. The tour is arrange by the Iberia Parish Convention & Visitors Bureau.The LTCC promotes the coastal parishes of Louisiana. Mindy and Lauren are coordinating public relations efforts to generate media coverage for the region. They want to experience our area to better promote us to journalists. 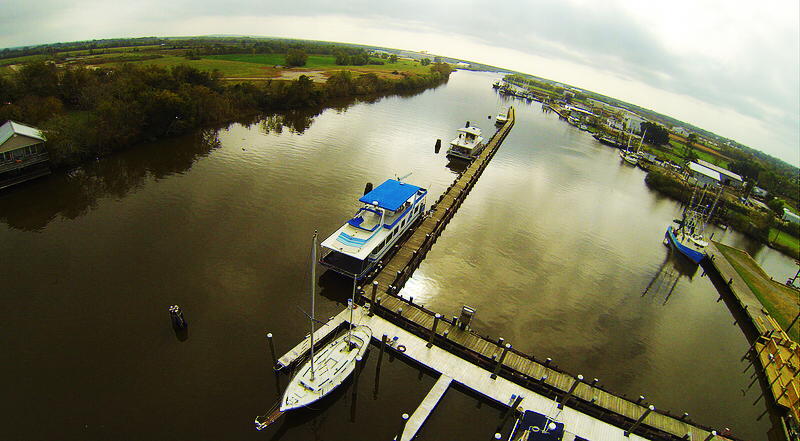 The Port will be hosting a visit by representatives of the ad agency, Gillies and Zaiser PR, as part of the Louisiana Tourism Coastal Coalition. Mindy Bianca, Executive Vice President, and Lauren Frye, Senior Account Executive, will be visiting Delcambre on Thursday, March 16th.

They will tour Bayou Carlin Cove Boat Launch and Pavilion, North Pier Marina, as well as other sites in town.From there, the tour will continue to other stops in Iberia Parish, including Bayou Teche Museum, Jefferson Island, KONRIKO Company Store, and other sites. The tour is arrange by the Iberia Parish Convention & Visitors Bureau.

The LTCC promotes the coastal parishes of Louisiana. Mindy and Lauren are coordinating public relations efforts to generate media coverage for the region. They want to experience our area to better promote us to journalists.

The United States Geological Survey conducted a study on how sea-level rise (SLR) and urbanization will modify coastal landscapes across the globe. The USGS is a scientific agency of the UnitedStates government that studies the landscape of the United States, its natural resources, and the natural hazards that threaten it.

According to the study, salt marshes and wetlands have adapted to sea-level fluctuations by moving landward. As sea levels rise, some tidal saline wetlands will adapt and migrate landward in undeveloped low-lying areas where migration corridors exist. However, where natural and man-made barriers are present (such as, natural bluffs and seawalls or levees, respectively), landward wetland migration will be halted.

The study can be found at the Monthly Bulletin of the Gulf of Mexico Climate Community of Practice.

The Sea Grant Oil Spill Science Outreach Program announced three new outreach publications – all focused on dispersants. You may access the PDF of each individual publication by clicking on its title.

Chemical Dispersants and Their Role in Oil Spill Response


Fate, Transport and Effectiveness of Dispersants Used in the Deepwater Horizon Oil Spill

Learn about the effectiveness and persistence of dispersants in the environment and whether it was necessary to use dispersants at the subsurface.

Learn how dispersants impact aquatic life in terms of life stage and species, and how lab and field studies can provide a more complete picture of the implications of exposure to oil and dispersants.

They also posted the recordings of recent Sea Grant seminars that focus on dispersants:

Beyond the response: A look at the science and policy behind dispersants

Understanding the toxicity of oil and dispersant mixtures, and the development of alternative dispersants

Bridging the gap between oil spill researchers and responders

The Twin Parish Port Commission announced on Wednesday, August 13th, 2014 that the long-awaited opening of the Bayou Carlin Cove has finally come!

The boat launch itself has 4 bays, with 2 bays on either side of a floating deck, allowing for 4 boats total to launch.  This is quite a welcome change from the original one bay boat launch which would easily become congested with frustrated boaters anxious to get on the water.  In addition to the new boat launch, there is now a fishing and observation pier, three slips for shrimp boats to dock and sell shrimp directly to the public, and a newly constructed Pavilion to be utilized for events such as the Delcambre Seafood & Farmers Market.

Fees will be assessed for use of the boat launch and facilities at a Day Rate, constituting a full 24 hours:

An Annual Pass is available for each calendar year.

For convenience, there is an Electronic Pay Station on site whereby patrons can utilize either cash or a credit card, and the machine will then print out a receipt to be displayed on the front dash of your vehicle.

The Glen Lege Construction Company began this project back in August of 2013 and after minor delays was completed a year later, August, 2014.  Now that construction is complete, future plans to make the launch facility even bigger and better are in the works and will include amenities such as:  fish-cleaning tables, boat rinse station, an ice machine, bait shop, RV Parking, dry stack storage, restrooms, paved parking for the pavilion, and limestone parking for vehicle boat trailers. The pavilion will also have accessibility for the disabled.  Even more exciting will be an additional 2 bays allowing for 4 more boats to launch.

As a community in desperate need of this new boat launch facility), we must recognize and thank those who have financially contributed to its amazing success.  Without these monies, the new Delcambre Boat Launch wouldn’t have become a reality.

The $4M project has been fully funded by several sources.  The largest contributor was a federal grant from the Fisheries Infrastruture program, which was designed to help restore and replace the fisheries infrastructure, both recreational and commercial, along the coast after Hurricanes Katrina and Rita devastated the coastline and the economy in 2005.  From this, the Fisheries Infrastructure donated close to $2.4M to Delcambre for this project.  Also, during this time, the Iberia Parish Council was receiving what’s called Long Term Recovery Funds, which were also federal funds.  From the funds they received, $600K was dedicated to this project. Further, another supplemental program to the Fisheries Infrastructure program, was a program called the Coastal Fisheries Recovery Fund.  This fund contributed monies to Iberia Parish, who in turn designated to the Delcambre project an additional $400K, for a total contribution from the Iberia Parish Council in the amount of $1M.  Let us also recognize our own Twin Parish Port District who contributed $600K to the project.  Thank you.

The community would like to thank all who had a hand in making this a memorable day in the community.  An open invitation is issued to all to come on back to the Delcambre Boat Launch on Saturday, September 6 at 11:00 a.m. where there will be a Ribbon Cutting Ceremony celebrating the Grand Opening and officially dedicating the new Delcambre Boat Launch facility, including the new Pavilion.  Immediately following is the opening of the Delcambre Seafood & Farmers Market, which, if you haven’t already heard, was recently ranked 59th best Farmers Market in the Nation!  Music by Cajun French acoustic artists, The Melancon, Thibodeaux and Bellard Trio will be there to start things off and give you a reason to dance!

For more information about the new boat launch facilities or the Seafood and Farmers Market, please contact the Port Community Relations Director at (800) 884-6120 Ext. 7.

Port representatives recently attended the Ribbon Cutting ceremony for the Erath/Delcambre Community Care Center. Although the center has been open since February, this Grand Opening provided a formal tour of the facility and an open house to introduce the staff and administrators to the community at large.  The event was well attended by community officials and well-wishers as well as representatives from the Center’s parent organization, the Abbeville General Hospital. All are very proud of being able to offer Erath and Delcambre residents access to quality care close to home.

This is a full service clinic with Dr. Lanminh Pham, the Family Practitioner, Simmie Soileau, the Nurse Practitioner, and Dr. Gilbert Pellerin, the Obstetrics/Gynecology doctor, offering primary care services to all. A Financial Coordinator (contact number 337-898-6593) is available to offer assistance to all patients, regardless of ability to pay.

Come check it out. This is an outstanding addition to the neighborhood, and a clinic of which all can be very proud.

History of Design Concepts in Delcambre

New Concepts Were Introduced. Shortly after Hurricane Rita delivered a 7 to 8 foot tidal surge that inundated the region with flood water, the communities of Delcambre and Erath began the planning process to rebuild. The planning process as it relates to Delcambre focused on the unrealized potential of the waterfront assets along the Delcambre Canal and focused on the marketing possibilities of the Delcambre community. Below is an outline of the architectural concepts and the marketing analysis that is guiding the redevelopment of Delcambre. A New Architectural Design Was Explored. Several ideas are incorporated into the drawings and renderings provided by the University of Louisiana (UL) Community Workgroup Design. The ideas include the following:

Marketing is Key to Redevelopment. The UL Marketing Department and students from its MBA program provided numerous reports and studies that outline the potential and strategies for the economic recovery of Delcambre. The studies show the following basic features of the marketing of Delcambre.

Housing Studies Show People Desire to Rebuild. The UL Sociology Department conducted a study of housing in Delcambre in the aftermath of Hurricane Rita. It showed that nearly half of all homes underwent flood resistant renovation in one form or another. More importantly, most residents chose to stay in Delcambre and rebuild their homes. New ideas and designs for flood resident homes are being developed by the University of Louisiana BeauSoleil project and can be incorporated into Delcambre’s redevelopment.

September 1, 2013
Below is a list of ongoing or completed projects:

We are Shrimp! Whether you want to buy a few pounds of fresh gulf shrimp for a family meal, or whether you want to come out and catch your own. You can do that and a lot more in Delcambre! (pronounced del-come.) Mostly, we want you to experience our hospitality, our culture, and our heritage. After all, even our name says Welcome!

Our Port is the hub of the shrimping industry. We have the farthest inland port in south central Louisiana with direct access to Vermilion Bay and the Gulf of Mexico. That makes us unique in that we can offer easy access to a waterfront environment with associated amenities such as a recreational marina, a seafood market, an improved boat landing with expanded vehicle parking, a fish and observation pier, and, in the future, shops, restaurants, and a boardwalk. Delcambre also has waterfront residential properties for sale.
For recreational boaters and sportsmen, our newly construct 32 slip Marina is open for long term and overnight rentals. It can accompany parking for recreational vessels along with dockside services and facilities.
We also have an Industrial Park for industries and businesses that benefit from water access with multi-modal transportation including rail and a four-lane highway to nearby interstate highways. Presently, Shaw Global Energy Services, Inc. employs over over 125 workers in a fabrication plant that builds and distributes structures all over the world. We are looking to expand our industrial and commercial facilities. Land is available now. Contact us if you need water access for your business.
Read More
Load More
Menu